SXSW Recap: Bushnells on the Future of Fun 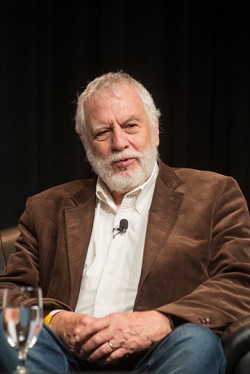 One of the highlights of SXSW 2016 was spending a good deal of time with the Founder of Atari, Chuck-E-Cheese and Etak founder Nolan Bushnell and his incredible family.   It may come as a surprise that the Father of Fun has eight talented offspring, six of whom are gainfully employed in gaming, film, entertainment, PR, augmented and/or virtual reality and startups.  While we couldn’t fit them all on stage for a panel, having four family members on our panel was a great start — and a SXSW first!

Our panel “Smartertainment:  Bushnells on the Future of Fun” was one of eleven invents in IEEE’s Tech for Humanity Series at SXSW Interactive.  The session featured man himself,  eldest daughter Alissa Bushnell, Managing Director of 104 West Public Relations,  son Brent Bushnell, CEO of Two Bit Circus and son Tyler Bushnell, CEO of Polycade.

Getting to know this incredibly smart, funny and easy going family was fun, to say the least.  They’re just nice people.  I was also touched to see the incredible love and respect members of the Bushnell Clan demonstrate for each other.  Together, they addressed the future of entertainment, beginning with with a retrospect on what it was like “growing up Bushnell.”  Here are a few notes from the session mixed with insights from our side discussions.

“We never went anywhere without Dad turning our experience into a puzzle, quiz or a game.” said daughter (and the first-ever Pong tester), Alissa.  It was all about presenting the family with challenges, from how much the tip should be, to how much the restaurant made on each meal.   The family bonded through games, play and problem solving.   Beyond Nolan’s participation in the advent of video gaming, the Bushnell family also enjoyed traditional games, from Dungeons and Dragons to games they made up on their own.

Travel and exploration also played a strong role in family bonding.  Nolan encouraged the children to rotationally accompany him on business trips. At age 10, a child could accompany him on a US-based business trip.  At age 12, a child could accompany him on European business trips.  At age 14, they were allowed to go to Asia.  In their teen years, when the kids would normally have been bonding with their peers, the family made a move to Europe where they bonded with each other, visiting landmarks and museums, immersed in entirely different cultures.  Without question, the Bushnell family has a natural predisposition to explore and play — viewing life as a continuous opportunity to learn, grow and have fun.

Technology only made exploration more interesting, and as it matured, so did has the family’s tinkering, problem-solving and development of entrepreneurial vision.  Today, each Bushnell is immersed in their own enterprise, shaped by a childhood that taught them the importance of hard work, education, experimentation, perseverance, ingenuity and imagination.   The family dinner table remains an “epic forum for debate” where according to Brent, they usually leave with “about three new business or product ideas.”   It’s clear that while Bushnell clan is busy engineering the entertainment of the future through individual and partnered pursuits, the family remains as tight and playful as ever. 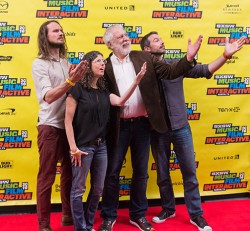 Pointing to the future, the Bushnell clan drew a clear picture of a transition from an era of simple gaming, into an IoT-enabled, high speed and increasingly immersive era.   In this era, our games and entertainment will be actively supported by smart sensors and devices, big-data, and new algorithms for decision-making and storytelling.

As AR/VR take center stage, the point to the resurgence of the arcades of our childhood pasts….which now serve as a test-ground for the rich, immersive, entertainment that will someday  be placed inside the home.  As out-of-home becomes a proving ground for new experiences, new forms of immersive entertainment, like MeowWolf, experience rooms, and totally new mixed reality experiences and games will bring people together in increasingly fantastic ways for entertainment, learning and collaborative problem solving.

As the industry matures in its ability to deliver and orchestrate the delivery of immersive content, driven by algorithms, sensors, biometrics and more, we’ll not only usher in an era of smarter entertainment, our experiences will become increasingly relevant, realistic, and collaborative by nature.  Further, as automation begins to relieve us of the mundane, everyday tasks, we’ll not only have more time for new forms of entertainment, we’ll be able to engage just about anywhere, as any surface becomes a stage — from a wall to a car window.

Beyond entertaining diversions, games and simulations will be increasingly used for therapy. They’ll enhance our ability to learn and remember, help people overcome fears and manage past trauma.  They will be used to coach and prepare us, and expand our thinking by transporting us to new places.  As our entertainment becomes more immersive and experiential — it will more deeply impact the way we understand the world we live in — and help us find our place within it.

What was perhaps most interesting to me, as a fly on the wall of animated discussions and planning discussions, was how the discussion always came full circle.  We started by talking about the power of play, fun, discovery, creativity, learning and bonding through immersive, rich, real-life experiences.   When we talked about the future of entertainment, we ended up in very the same place.  Without question, in an era where technology has the propensity to isolate us  –  the entertainment of the future carries the promise to form new bonds with each other through play, fun, discovery, problem-solving and learning.

There was something very special and inspiring about bringing the First Family of Fun to SXSW to the stage to talk about the future of entertainment at SXSW 2016.   Live Path an IEEE extend our thanks again to Nolan, Nancy, Alissa, Brent, Tyler and Molly and the Two Bit Circus STEAM Carnival team, which provided fantastic entertainment for the IEEE Tech for Humanity Party!

You can watch the session now, here: